Excel Indirect function can be used to return a valid reference from a given text string.

The cell reference provided in this formula will not change when you add or delete rows and/or columns. For Example, =INDIRECT(A1: E1) will always refer to the first 5 columns of the sheet even if new columns are added or deleted.

In this article, you will learn in details regarding the following:

This function does not perform any calculation or evaluate any logic or condition.

So, What does it do?

Excel Indirect function is used to indirectly reference a cell, or a range of cells of a sheet.

[a1] – specify the type of reference (A1 style or R1c1 style) mentioned in ref_text. Omit or type TRUE if the reference is an A1 style or enter FALSE if it is an R1C1 style.

The type of references are: 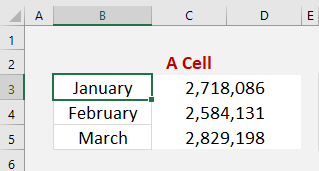 The INDIRECT function is really cool as it can be used to reference sheet cells or a range of cells.

It opens up a lot of interesting possibilities as you can have fun creating flexible formulas, like indirectly summing the values that reside in another worksheet!

Let’s look at a basic example to understand how this function works!

Basic use of Indirect Function

In the example below, you have used the Indirect function to return a value when the referenced range is a cell.

Now, when you type the formula =INDIRECT(I2) Excel will follow the steps below:

As you can see, the Excel Indirect Function converts the text string D2 into a cell reference.

Using R1c1 style, the same formula will be: =INDIRECT(K2, FALSE)

Cell K2 contains the cell reference in the R1C1 style.

Make sure to provide the second argument of the function i.e. [a1]. Here, it is FALSE.

Until now, you have covered how to use Excel Indirect function when you are trying to fetch values from the same sheet.

Let’s see how it works when you want to use an Excel reference cell in another sheet dynamically!

Reference a Cell in Another Sheet

Read below to learn how to insert Sheet reference in Excel Indirect Formula.

Watch it on YouTube and give it a thumbs-up!

In this example, you have two Excel Indirect Sheet name – Summary Page & January.

In Sheet – January, you have sales data for the month of January and a total sales amount achieved in that month mentioned in cell I3.

In the sheet – Summary Page, you want to pull the total sale figure in cell E11.

You can use the formula below:

Sheet references are in the format of SHEETNAME!CELL, an example would be January!I3 which would mean the cell I3 in the worksheet named January.

Say we enter in cell C11 the worksheet name: January

In another cell, we enter =INDIRECT(C11&”!I3″), which will translate into =INDIRECT(“January!I3”) as the ampersand & will concatenate/join the two strings together.

NB: Highlighting the contents between the parenthesis and pressing the F9 key will confirm this:

This will indirectly return the value that resides in cell I3 in the worksheet named January, which has the total sales amount of $2,718,086 in our example below:

This is how Excel sum indirect another sheet reference works! 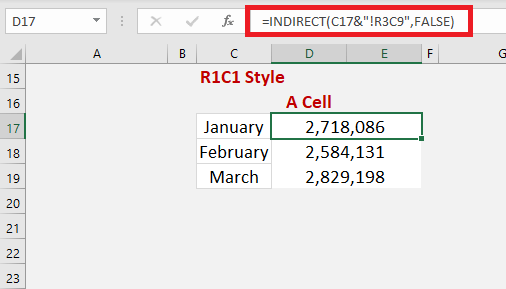 Reference a Range of Cells in Another Sheet

Instead of fetching the summation value from one cell, you can pull data from a range of cells i.e. D:D. 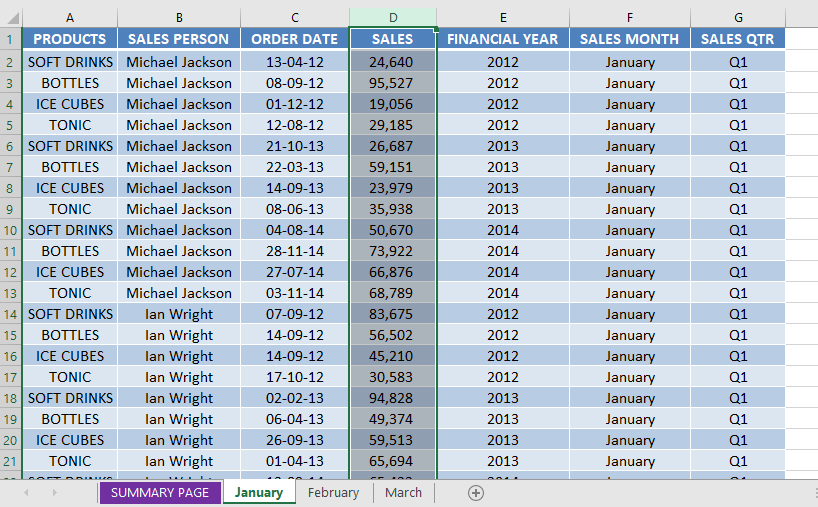 You can use the formula below:

We can then enter a SUM function which will total the referenced cells of that sheet.

Say we enter in cell G12 the worksheet name: February

In another cell we enter =SUM(INDIRECT(G12&”!D:D”)), which will translate into =SUM(INDIRECT(“February!D:D”)) as the ampersand & will concatenate/join the two strings together.

This will indirectly Sum the values that reside in column D in the worksheet named February, which is $2,584,131 in the example below (click to expand image):

This is how Excel will use indirect function excel different sheet reference and fetch values from there!

There is a lot that this incredible function – INDIRECT can do. Click here to know all about it!

You can learn more about how to use Excel by viewing our FREE Excel webinar training on Formulas, Pivot Tables, and Macros & VBA!