Searches for a value in the first column of a table array and returns the sum of values in the same row from other columns (to the right) in the table array.

The VLOOKUP function can be combined with other functions such as the Sum, Max, or Average to calculate values in multiple columns.  As this is an array formula, to make it work we simply need to press CTRL+SHIFT+ENTER at the end of the formula.  A very powerful feature for any serious analyst!

See how easy it is to implement in less than 1 minute with this VLOOKUP for multiple columns example!

Want to learn more about how to use VLOOKUP to Sum Multiple Columns?

Watch on YouTube and give it a thumbs up 👍

STEP 1: We need to enter the VLOOKUP function in a blank cell:

What is the value to be looked up?

Select the cell that contains the item name, which is Laptop.

Select the Units Sold table, as that is where our formula is going to get the unit numbers.

Which columns in the table_array contains the data you want to return?

Would it be an approximate match?

Set this to FALSE as we want an exact match for Laptop.

STEP 3: Now wrap the formula with the SUM formula as we want to get the total number of sold units for Laptop.

Ensure you are pressing CTRL+SHIFT+ENTER as we want to calculate this as an array formula.

Do the exact same formula for Max Units and Average Units, by changing the SUM Formula with the MAX Formula and Average Formula respectively.

👉 Click Here To Join Our Free Formulas & Functions Webinar Training on VLOOKUP, IF, SUMIF & INDEX/MATCH & Advance Your Excel Level!
Trustpilot
If you like this Excel tip, please share it

There are no reviews yet. Be the first one to write one. 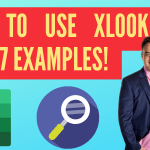 How to use the XLOOKUP function in Excel with 7 Examples!

This is an necessary category.